Living on base your entire military life, you may forget how to talk to non-military neighbors. A list of things not to say-from someone who’s good at saying the wrong thing. 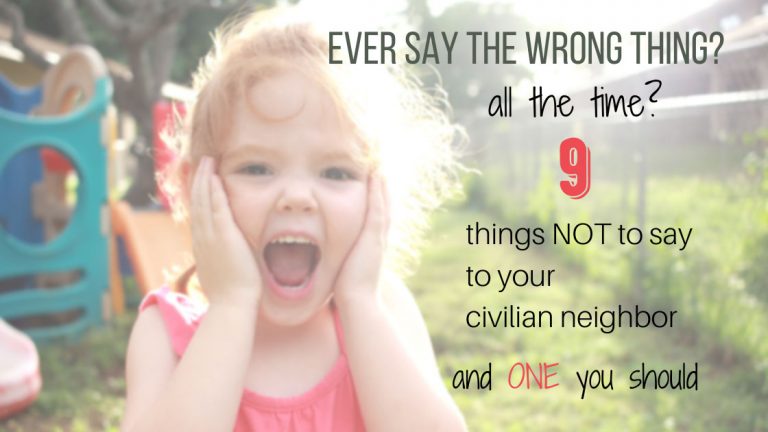 Living on base for most of his career, you may forget that life exists outside of the military. People do in fact live normal lives. But what’s normal really?

Back before this military journey I had no plans of moving more than a few hours from where I grew up. I  imagined the grandparents watching the kids for date nights, and I probably wouldn’t have even attempted to cook a turkey for Thanksgiving.

We’ve been away for over 10 years now and crazy enough; the thought of not having moved anywhere else is unimaginable. Of course we want to go home and show our kids what it was like growing up in New England.

But having lived on base the entire time until now, I had to remind myself of how to talk to civilians. To watch what I say and how I say it because lets face it, they don’t know me.

They don’t know my heart or your heart and what you say can cause offense even if you don’t mean to. 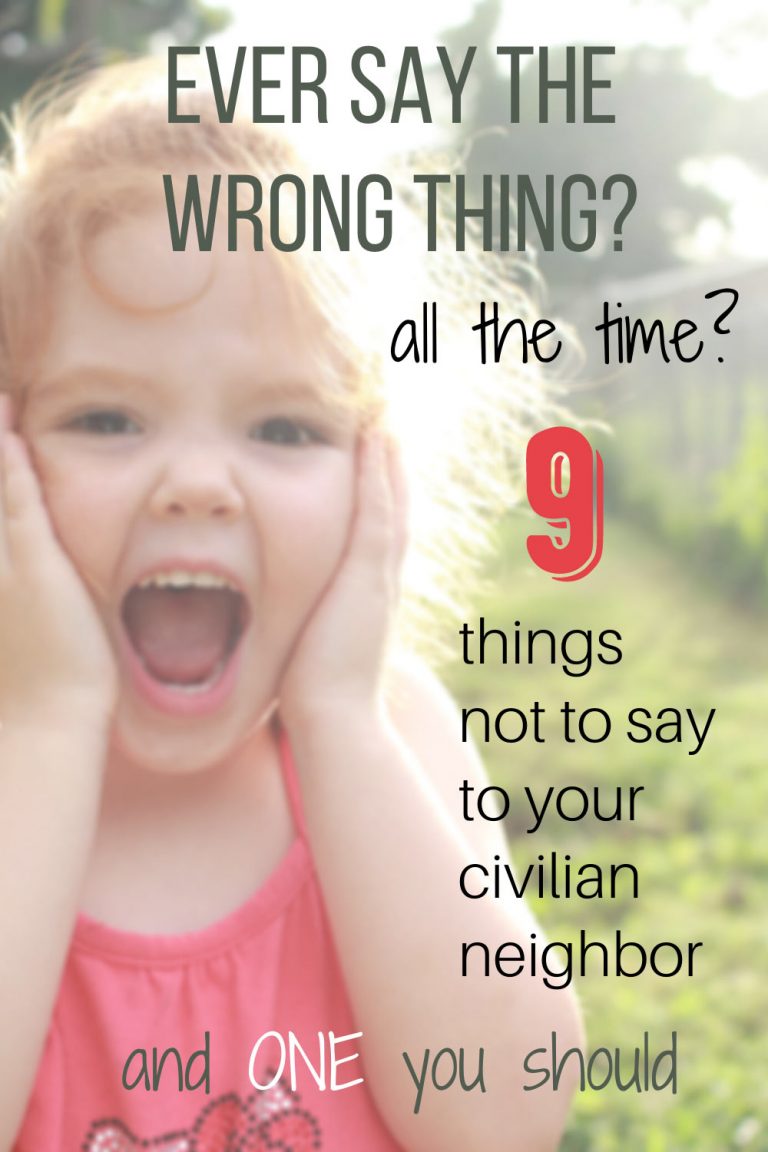 9 Things NOT to say to your civilian neighbor

Referring back to your Old Duty Station

Yes you can talk about where you’ve been and share your stories, but you have to remember to watch your tone. Not everyone gets to live in Hawaii, Germany, Spain, Japan or even Alaska.

It’s a dream! Or possibly a nightmare depending on your experience. But to most civilians, its just a place they wish they could visit.

Back home we had the best Chinese food! I loved the duck sauce (no not from the gross packets! Stop that!) Homemade duck sauce. I could drink it. Ok, not really drink it, but its so good!

You wouldn’t understand unless your from New England. And that’s the thing, people have very different tastes. If they tell you about a great restaurant smile and node.

Try it out and don’t be negative or compare it to other places you’ve been. You’re here now. Be positive

The words they use are Different

No matter where you go they say things a bit differently.

Soda vs. Pop vs. Coke. Lollipop vs. sucker. Bless your heart vs you’re nuts.

After the first initial cuteness of it, move on and be yourself without further comparing.

Don’t tell them the drivers here are crazy.

They may or may not be, but it’s because you’re use to driving someplace else. You know how to predict what they are going to do because you grew up with it.

Then learned to adapt your driving to your surroundings. But now you’ve lived at 3 different duty stations. Chances are if you drove back home you’d be a little rusty and think they are crazy yourself.

One exception- If they brief you when you first arrive that the drivers are crazy…. believe them.

Do NOT say you hate it here

Fine, it may not be your favorite station, but it’s a fun chapter in your life! If you are willing to be positive that is. Look for all the good things about this place.

Ask about their favorite lakes. What it was like growing up. Where they like to take their family on a weekend road trip. Go explore!

You’ll probably move in a few years, so enjoy what this new place has to offer.

And if you can’t find someplace you love, make one! Find those backyard BBQ friends and make some memories.

Don't use Military Lingo-and expect them to follow along

They don’t know what PCS or TDY is. Heck I even get confused with the lingo my husband uses.

Babe, sometimes I have no clue the words coming out of your mouth!

Yes we should know the military terms, but its different if you’re talking to a military friend vs your neighbor, or even your family back home.

Even though that is amazing, and we don’t always have that luxury, we don’t need to be bitter about it. We knew the family challenges a crazy schedule would bring. Or at least we thought we knew.

They chose to stay close for many reasons, possibly including this one.

It doesn’t mean they don’t like you or that anything is wrong. It just means they have other things going on. Maybe they are visiting one side of the family vs just eating next door.

Maybe they have their hands full at their house. Maybe they want to keep it small.

Whatever the reason respect it. Not only is this new to you, its new to them.

If either of you have other plans but you still want to spend time or show you care, try inviting them over for dessert or just save a plate for them.

As much as I’d love to know everyone on my street, and possibly find some adopted grandparents for my kids, it’s ok to just be friendly without being friends. You might not be everyone’s cup of tea, and they might not be yours.

Keep some Mystery in your Friendship

Say things like ‘I’d love to tell you but it would break OPSEC’  just because its fun to mess with them.

Our lives are different and that’s ok. If you look hard enough you can always find something in common.

Whether you’re friends or just friendly.

A quiet neighbor is a good neighbor. A friend is just a bonus, and whatever the relationship becomes everyone enjoys cookies.

So be the neighbor you would want to have and remember there are good things and good people everywhere you go. You just have to be brave enough to say hello. 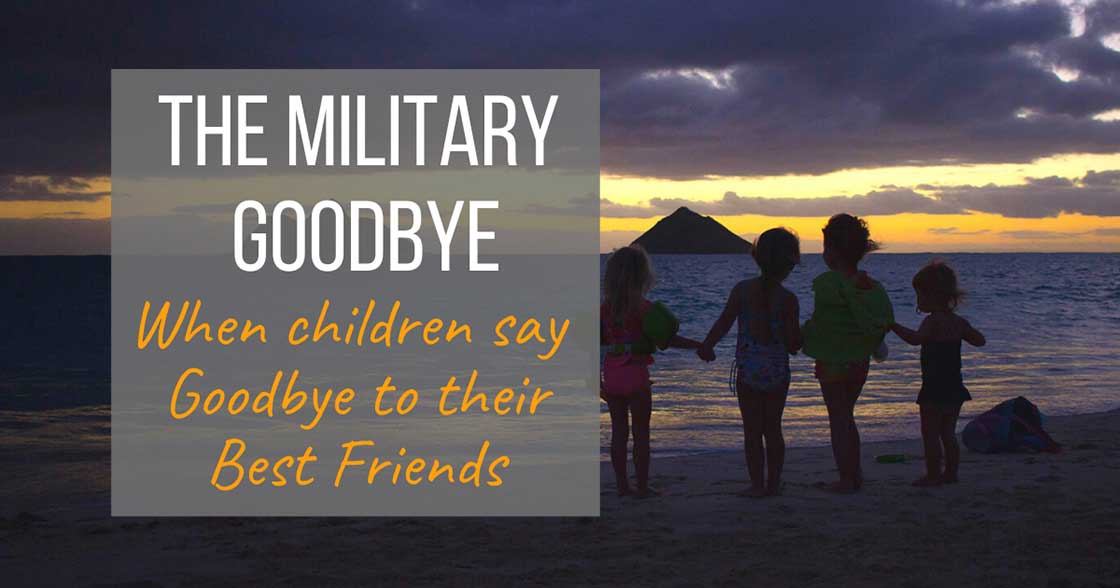 The Military Goodbye- The broken hearts of our children 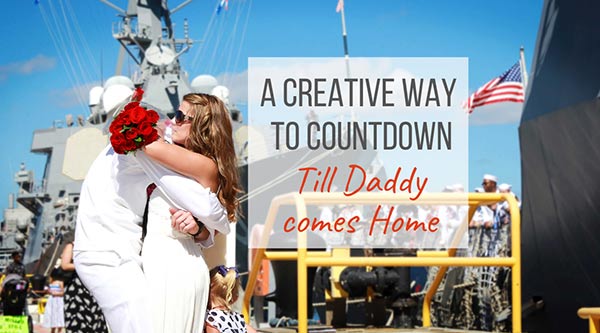 The creative idea this family uses to pass time- 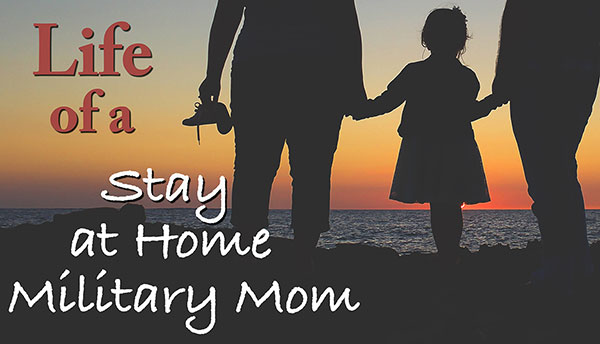 The odd schedule of a Stay at Home Military Mom

How to paint outdoor light fixtures without taking them down